The Lost Art of Letter-Writing 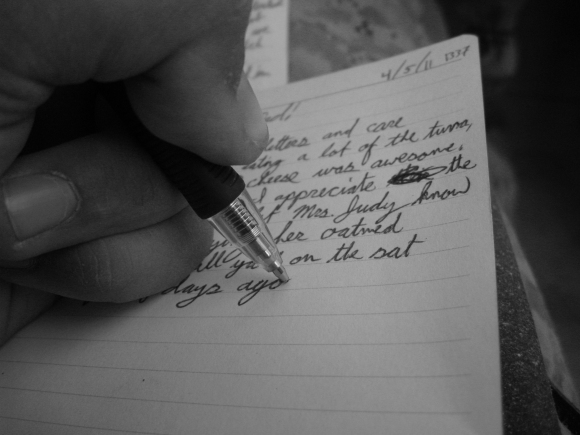 There are seemingly very few advances, technological or otherwise, that are genuine advances in every respect, since often a great increase must be achieved at the expense of something else. For photography, we sacrificed painting; for television, books; for America, lives; and, in the case of email and cell phones, we have largely sacrificed meaningful correspondence with each other. The reasons for the decline in letter-writing are as numerous as they are obvious, given the momentum of undeniably practical communication technology, and there are no signs of (and perhaps no widely compelling reasons for) its return. In speaking of ‘letter-writing’ I do not mean to refer to the still common practice of taking a family photo, scribbling a greeting on the reverse, and mass-mailing it to all one’s acquaintances during the holiday seasons. No, I mean the arguably old-fashioned habit of penning intimate letters, sometimes of significant length, to one’s friends and family. Perhaps my use of the term ‘lost’ in the title is too hasty a judgment, but whether or not the practice has actually undergone a full interment is beside the point.

One might well argue that it is now quite unnecessary and impractical to take the time to write a lengthy letter (or even a letter at all) when such more practical methods exist which allow greater frequency in a given correspondence; and as to its impracticality, I would readily agree. But it can only be considered unnecessary if one is willing to forfeit the obviously great significance of a hand-written letter. We fool ourselves into thinking that that which is ‘practical’ is ‘best,’ but unless the Pragmatists are correct, this could not be further from the truth. For if it were true that there is nothing to be gained in the sacrifice of the practical, then a rejection of every obsolete and inefficient practice would form the basis for a philosophy very much like Pragmatism; and yet anyone who has made even a small sacrifice for the sake of someone else implies that he believes there is such a thing as Good and that it is not synonymous with Efficiency. In light of its utter impracticality, the effort to write each other should perhaps be granted a promotion. For a friendship conducted on the basis of practicalities is a friendship in name only; and I am loathe to think of what joy I would be deprived if, instead of an hour’s conversation, my closest friends should always decline in favor of mopping the floor.

An increased rarity and impracticality have imbued personal letters with an even further significance: a significance which, I think, is not often taken for granted, but as yet has proven to be an insufficient motivator, since even a prevailing sense of gratitude in receiving a warm letter from a friend is usually not enough to induce us into action. This is certainly as true of me as of anyone else, for in lamenting the decline of the practice I am merely making myself out to be a hypocrite. Like the Apostle, “I do not understand what I do. For what I want to do I do not do, but what I hate I do (Rom 7:15).” Though the success of any sort of relationship is, of course, not predicated on a particular medium of communication, it seems to me wholly naive to think that in refusing to write letters we are not depriving ourselves of something truly beneficial (if not beneficial, at least something pleasant). A hand-written letter carries with it an undeniable and irreplaceable meaning, and there are things we tend to write by hand that otherwise would remain unsaid. I have received meaningful emails and text messages, all of which I greatly appreciate; but if asked to choose between my ever-revolving inbox or my dusty drawer full of ‘war’ letters, I should take the latter in an instant and without the least tinge of regret.

Much of what we know about history and the persons involved, their motivations, perceptions, and feelings, is borne out in their diaries and letters to each other, and that a whole generation or series of generations should be generally devoid of such kinds of records is regrettable; but the lack of records is not the real loss. Rather, it is the intangible deficit in our interactions with each other. I agree with Lewis that “Friendship is unnecessary, like philosophy, like art, like the universe itself (for God did not need to create). It has no survival value; rather it is one of those things which give value to survival (C.S. Lewis, The Four Loves).” If friendship gives value to survival, letter-writing almost certainly gives value to friendship, and the diminishment of the practice should succeed only after our greatest efforts to resist it.