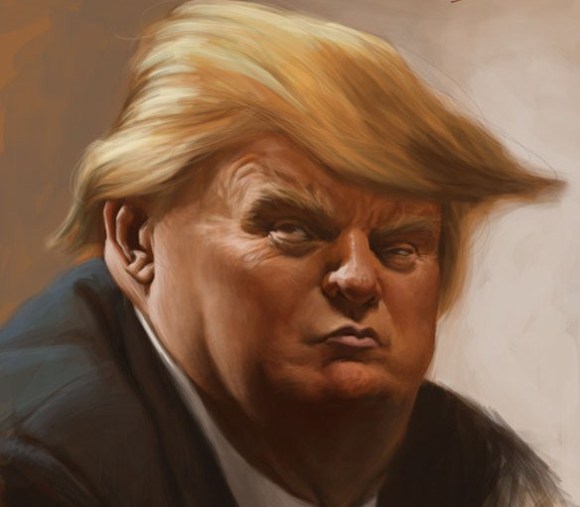 So Trump it is, then. The dismissive chuckling at the prospect of a Trump nomination emanating from the Nate Silvers and Jennifer Rubins of the world, among scores of others, has trailed off into the animated din of those attempting to appraise the strange and–some would say–unfortunate state of political affairs we presently find ourselves in. There does, after all, come a point at which genuflection to fact is the only reasonable course for even the most prescient. While registering my sympathies with the conservative among us–those who are at present engaged in collective hand-wringing over Trump’s bizarrely consistent successes–I here wish to consider what follows from the apparent fact that Trump’s (stated) values and policies are not as asynchronous with the majority of the Republican voting base as initially supposed. That is to say, if Trump has merely set sail atop a previously latent political undercurrent, in addition to supplying more than a little of his own hot wind, then the problem of Trump’s nomination is more sinister, for it is no fluke.

Conservatives, then, must contend with the reality that, to the shame of the Republican party, a candidate of Trump’s caliber–or anti-caliber, as it were–has by popular demand been given a realistic shot at assuming the highest office in the nation. Yes, that same gentleman and scholar who remarked that “You know, it really doesn’t matter what [the media] write as long as you’ve got a young, and beautiful, piece of ass” (Esquire, 1991), boasted about his phallic proportions in a presidential debate, pretended to be his own publicist, and defended the notion of lethal attacks on terrorist’s families is seeking to be, among other things, Commander-in-Chief of the armed forces of the United States. Were it not actually the case, this could easily be the beginning of a good joke. Though I have in past elections grown accustomed to being underwhelmed by the results of the Republican primaries, never before have I been so disinclined to associate myself with the Party. One cannot help but imagine a White House emblazoned–perhaps literally in Trump’s case–with a large, gilded “T”–the perfect realization of what had previously been but a Leftist caricature of the GOP. Unfortunately in Trump’s case, however, no caricature is needed; or, rather, he supplies the necessary material himself. Thus, the GOP can no longer pretend that large swathes of its voting base are not as susceptible to cheap populist rhetoric as their progressive peers.

Though these forces have lain dormant for some time–or have at least been politically outmatched–the bloviating businessman’s puerility has apparently been sufficient to induce their emergence en masse from beneath the feelings of disenfranchisement that have heretofore characterized their apathetic relationship to Republican primaries (c.f., Politico). If an unabashedly fluid opportunist like Trump can best unabashed constitutional conservatives, such as Ted Cruz and Rand Paul, the GOP has no choice but to perform its own autopsy with respect to conservatism. Indeed, Trump’s rise has merely confirmed the lingering suspicions of many that a capital “R” following one’s name cannot reasonably be assumed to indicate one’s solidarity with conservatism.

Though, like many of the best medicines, it terrorizes the tongue, I consider this latter effect to be among the positives of Trump’s electoral success. Trump, though a danger to conservatism, may catalyze a schism–and hence a purification–of the GOP, wherein the conservative wheat is separated from the non-conservative chaff. So long as they are all largely in one place, whether the chaff is blown in or blown out makes little difference.

The criticisms elucidated here should not be taken to indicate a tacit preference for Trump’s chief rival to the throne–the former Secretary of State, Hillary Clinton; for I am here taking her odious duplicity for granted. Indeed, her history of casuistry is an equine corpse I shall leave for others to beat. Despite this, the common assertion that one must vote for Trump in order to avoid the inevitable calamity of an H.R.C. presidency is a difficult sell on at least two counts. First, because it is not at all clear that the erratic Trump is preferable to a largely predictable, if thoroughly duplicitous, Clinton. The claim that Trump is the solution to the disastrous presidency of Barack Obama, or that he is clearly preferable to Clinton (though he may be) is a tiresome one; namely, because it is naïve. From a conservative point of view, declarations of this kind are akin to the insistence that hemlock is clearly preferable to strychnine if taken with a bit of lemon. (This assumes, of course, that virtue–or, at least, a love of its pursuit–ought to be highly prized in a candidate.) However damaging Clinton’s proposed policies may be, we at least know, by and large, what they are; neither we nor Trump know what he will actually do as President, promises of “walls” and “deals” notwithstanding. Though a case can in certain contexts be made for tactical votes (i.e., votes intended primarily to keep a worse candidate from winning), there must be principled limits to such reasoning–limits which, in my opinion, Trump has far exceeded. (For instance, the candidate being voted for must not have vices which match or exceed the severity of those exhibited by his opponent. But I shall leave this aside.)

Second, insofar as the Trump-or-Hillary-ers began making their case long before Trump was the inevitable nominee, they showed themselves to be disingenuous as to their reasons, this lack of candor following from the apparent implication that, rather incredibly, there was not a single candidate among the very large initial field preferable to Trump. By almost any standard, such a notion is, to borrow Aquinas’ line, “repugnant to the intellect.” (That is, unless one’s standard for endorsement is, like Dr. Carson’s, the likelihood of being given a position in a candidate’s future administration.) Whatever the merits for such an argument now (that Trump is the inevitable nominee), it was thoroughly meritless then, and hence difficult to take seriously, especially since many of its purveyors are responsible for forcing the rest of us into this awkward predicament. As the Indian proverb goes: once you have cut off a person’s nose, there is no point giving them a rose to smell. As exemplary practitioners of this exercise in non sequitur, I have in mind such counterfeits as Sarah Palin and Dr. Carson, whose glowing endorsements of Trump are (to me) sufficient to justify their dismissal from any future conservative round-tables.

Assuming, as I am, that a Trump presidency is likely to be inimical to the values maintained by constitutional conservatives, we see exemplified in Trump’s current political success a potential continuation from the election of President Obama of what may be called the paradox of freedom; namely, that a free people is only truly free insofar as they are able to choose that which undermines their freedom. This point is given lucid treatment in Os Guinness’ A Free People’s Suicide: Sustainable Freedom and the American Future, the thesis of which is that freedom rests on three mutually-dependent legs: “Freedom requires virtue, which in turn requires faith of some sort, which in turn requires freedom. Only so can a free people remain ‘free always.’” If, as I suspect, Dr. Guinness has highlighted a profound insight, what are we to make of a voting public that, when pressed on the importance of virtue or faith in a leader, expends only what little effort it takes to raise its shoulders an inch or two? Though I hesitate to suggest what might be reasonably inferred of a nation of over three-hundred million that pits a Hillary Clinton against a Donald Trump as the two best candidates to don that venerable mantle wrought by the likes of Washington, Jefferson, and Adams, Christian Smith, in his 2009 book Lost In Transition: The Dark Side of Emerging Adulthood, does not, summarizing what he takes to be the deeply rooted afflictions in American culture, of which the success of a candidate like Trump is now ostensibly a symptom (see The American Conservative):

In short, if our sociological analysis in this book is correct, the problem is not simply that youth are bad students or that adults are poor teachers. It is that American culture itself seems to be depleted of some important cultural resources that it would pass on to youth if it had them — and yet not just for “moral” but also for identifiable institutional reasons, as repeatedly noted above. In which case, not only emerging adulthood, but American culture itself also has a dark side is well.

This analysis strikes me as apropos. For good or for ill, we do indeed get the leaders we deserve. Dylan’s poetic, if technically trivial, observation in 1964 was that “the times they are a-changin.’” Given that a real-life parody like Trump can even come close to attaining the presidency, I say: “changin’ indeed.” If the real problem is not merely a rogue candidate, but rather a culture throughout which vice and ignorance have metastasized, the work we have before us is great, but not impossible. It is the wearyingly slow but vital work of grassroots evangelism, both political and spiritual. For such ailments, there are no quick fixes, no obvious panaceas for which we might campaign or lobby; nor is there some candidate whose election would constitute a remedy, for the malady is pandemic. In view of the vitriol associated with this election cycle, however, I would not be the least surprised to discover an intimate, if indirect, connection between the beginning of a shift in the current paradigm and a widespread loving of one’s neighbor as oneself.